Timeline of Key Events that influenced English Language
Please click on the images to enlarge them! 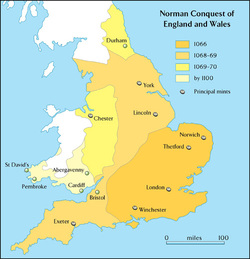 Norman Conquest of England: 1066
The major events that define the Middle English Period are at the cusp of the era, the Norman Conquest of England in 1066 and marking the close of the time was the arrival of printing in Britain and the English Reformation.  In 1066 the King of England, Edward the Confessor died with no heir leaving the throne to Harold Godwinson.  Harold was soon after attacked by the Duke of Normandy, William who overthrew the new king in the Battle of Hastings on October 14, 1066 (Littlefield, 2013).  King Harold was killed in this battle and William becomes the new King of England.  Because of the Norman invasion of England, the Old English era ended as the Normans brought French politics, fashion, architecture and most importantly the language (Durkin, 2013).  These influences began to seep into the culture of the time and over the next decades the English people adopted the culture and adapted their language.

Magna Carta: 1215
King John was forced to sign the Magna Carta to avoid a rebellion.  The Magna Carta, or the Great Charter, is the start of a constitution government in England and was the first document that limited the power of the monarchy.  This new system is what leads to the foundation of the English Parliament (Alchin, 2012).  The Magna Carta gave constitutional law to the English.  In terms of the document itself has been honored by many other nations and even acted as a model for the American Constitution.  Parts of the charter were later repealed but the law in essence is still in effect. 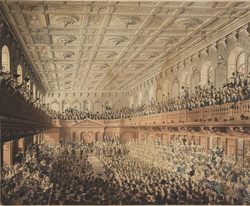 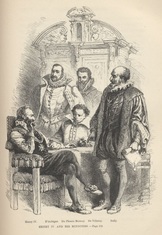 The Statute of Pleading makes English the official language in England: 1362 Parliament is opened with its first speech delivered in English. In 1399, at his coronation, King Henry IV becomes the first English monarch to deliver a speech in English (about.com,2013). 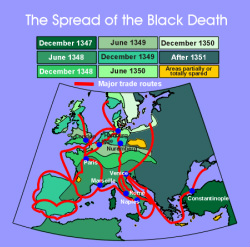 Black Death: 1348
The plague, known as the Black Death, hit England in the summer of 1348.  The low hygienic standards of the time lead to the rampant spread of the horrific disease.  When the disease hit London the death toll sky rocketed because the high population in the compact city and due to the fact that both the pneumonic and bubonic plague hit at the same time (Ibeji, 2013).  It is believed the plague killed a third of the population during 1348-1350 (Ibeji, 2013).  With over twenty people dying per day, language and education were put on the back-burner of the  English's priorities.

War of the Roses:1455-1485
In 1455 the Lancaster and York Houses of the House of Plantagenet, who ruled England, entered into a rivalry that turned into the War of Roses.  The War of the Roses is named after the two houses whose symbols are the red rose for Lancaster House and a white rose for the House of York.  After three years of fighting the Lancaster family won the war and the Tudor reign began in England (Alchin, 2012).  The establishment of the Tudor dynasty, lead England from into the Early Modern England.  As the economics and health of the country stabilized after war and disease, the country began to put more focus into literature and education. 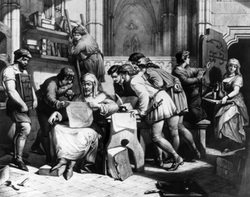 Printing in England: 1472
If the Norman Conquest marked the start of the changes that formed the close of the era is most importantly the arrival of printing in England.  William Caxton is noted for popularizing print in England and through his work a standard for the English language.  This brings us into the Early Modern English time (Weiner, 2013).
Below is an interactive Ages of English Timeline
Skip forward to slide 3 for information specifically on Middle English events!
http://www.bbc.co.uk/history/interactive/timelines/language_timeline/index_embed.shtml